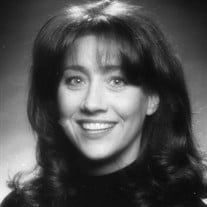 Sally Ann Struhall-Brown joined Our Lord on February 9, 2015 at her home in Dallas, TX. She was born on May 29, 1965 in Austin, TX to Geraldine and James Struhall. Sally grew up in Rusk, Texas and graduated from Rusk High School in 1983. Sally was an accomplished dancer and gymnast who went on to perform with the Southwest Texas State University Strutters; the largest university dance team in the nation, founded by Barbara Guinn Tidwell in 1960. Barbara is a close family friend whom Sally looked up to. Sally also became a certified Jazzercise instructor. She graduated from the University of Texas San Antonio. Sally also enjoyed travelling and became a Flight Attendant with Delta Airlines in 1998, where she got to fulfill her dreams by travelling to such places as Dubai, Paris, Budapest, Jordan and many others throughout the world. Sally is survived by her Mother, Geraldine Struhall of Rusk, brothers; James Struhall Jr. of Bullard and Larry Struhall of Dallas. Sisters; Suzie Struhall of Houston and Katie Struhall of Jacksonville. Nephews; Terry Struhall of Bullard, Jamie Struhall III and his wife Kattie of Rusk. Grandnephew James Struhall IV, great niece Madison Newland of Rusk, and ex-husband Mike Brown of Rye, NH. Sally was preceded in death by her father James Struhall, and Grandparents Affie and Abner Webb of Rusk, and Lillian and Dr. R.L Struhall of Austin, and her Aunt Mary Kathryn (Kay) Jordan. A Visitation will be held at Wallace-Thompson Funeral Home. 221 W. Fifth Street Rusk, TX 75785 Friday February 13, 2015 from 5:00-7:00pm. The Funeral Service will be held at 2:00pm Saturday, February 14th at Wallace-Thompson Funeral Home. The Reverend David R. O’Neal officiating. Pallbearers will include: Ken McClure, David Parsons, Kerri Smith, Steve Peters, Jamie and Larry Struhall. Honorary Pallbearers: Andy Huddleston, Jamie Struhall III and Terry Struhall. In Lieu of flowers, a contribution can be made to Mental Health America Bell of Hope Memorial in Sally’s name. Your contributions help shed light on the impact of depression and the importance of mental wellness in our lives. http://takeaction.mentalhealthamerica.net/site/TR?pxfid=1580&pg=fund&fr_id=1031

Sally Ann Struhall-Brown joined Our Lord on February 9, 2015 at her home in Dallas, TX. She was born on May 29, 1965 in Austin, TX to Geraldine and James Struhall. Sally grew up in Rusk, Texas and graduated from Rusk High School in 1983.... View Obituary & Service Information

The family of Sally Ann Struhall-Brown created this Life Tributes page to make it easy to share your memories.

Send flowers to the Struhall-Brown family.