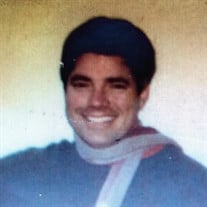 Graveside services for Ray Sanders Cryer, of Rusk, will be held at noon Friday, Jan. 8, 2021, at Lone Dove Cemetery in Cherokee County, with retired Army chaplain Col. Sam Hopkins and Rob Arrington officiating. Cryer, known best for his missionary work in Mexico, Haiti and India, died Jan. 1, 2021. He was born in Houston, September 3, 1940, the son of Arlene and Raymond Cryer, and active in Scouting, ultimately achieving the rank of Eagle Scout. Following graduation from Houston public schools, he served briefly with the U.S. Army, stationed in Korea from 1961-62. Cryer attended the University of Houston, where he received a bachelors degree in psychology, then attended the Warden School of Social Work at Our Lady of the Lake University in San Antonio. He worked as a probation officer in Milwaukee, Wisconsin; served with programs at Houston's Ripley House in Houston; was a social worker for Galveston County Health Department; and a social worker at Rusk State Hospital, rising through the ranks to become director of the facility's transitional living unit. Cryer also was social worker with TDCJ. He spent his life doing missionary work alongside his wife, Linda, traveling to Mexico, Haiti and India, providing medical supplies to people in small villages, and branching out to other projects, such as incorporating food-growing programs, road repair and establishing/improving water projects that benefited residents. He established the Cryer Foundation in the 1970s to help fund that work. His book, "A Village Waits For You," published in 2010, describes his journey in adopting villages. A second book by Cryer is "Man Ark – The Cryer/Ford Chronicles," also was published in 2010. In recent years, Cryer was recognized as a recipient of The Chapel of Four Chaplains award, a group dedicated to recognizing “ordinary people doing extraordinary things,” according to the website. He was preceded in death by his parents. He is survived by his wife, Linda Cryer of Rusk, and dear friends, Philip Atencio, the Jorge Cabrera Aké family and David Cabrera. Memorial contributions may be made to The Good Samaritan of Rusk; H.O.P.E., 595 S. Ragsdale St., Jacksonville TX 75766; or to the East Texas Food Bank, 3201 Robertson Rd., Tyler TX 75701. Funeral arrangements are under the direction of Wallace-Thompson Funeral Home of Rusk.

The family of Ray Sanders Cryer created this Life Tributes page to make it easy to share your memories.

Graveside services for Ray Sanders Cryer, of Rusk, will be held...

Send flowers to the Cryer family.