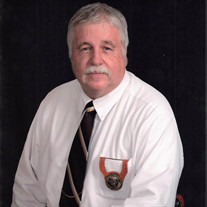 A funeral service for Randy Hatch, age 67, of Rusk is scheduled for 10:00 a.m., Wednesday, March 3, 2021 at the First Baptist Church in Rusk with Rev. John Allen Hatch, Rev. Brian Givens and Rev. Jim Goforth officiating. Burial will follow at Cedar Hill Cemetery. Randy passed away February 27, 2021. He was born March 9, 1953 in Port Neches, TX to the late Vernon and Gladys Higganbotham Hatch. He was preceded in death by his parents and a brother, Dr. Kenneth Hatch. He is survived by his wife, Sue Ella Boone Hatch of Rusk, two sons and daughters-in-law, Andrew and Sara Hatch of McKinney, TX, Timothy and Leslie Hatch of Rusk, five grandchildren, Jon, Jake, Rylan, Bailey and Hudson Hatch. Randy, was a dedicated law enforcement professional with a career spanning nearly half a century that carried him all across the State of Texas. He began his law enforcement journey with the City of Corpus Christi Police Department before taking the role of Chief of Police for the City of Rusk Police Department. He spent years working undercover narcotics all along the Texas/Mexico border before joining the Cherokee County District Attorney’s Office as an investigator. He faithfully served the citizens of Cherokee County until his retirement. Randy also spent 3 tours of duty in the mountains of Afghanistan supporting Marine units through contracted intelligence and training. Randy was a true law enforcement professional who believed in standing up for the weak, seeking justice through truth, and leading by example. He touched the lives of victims of crime, criminals, and law enforcement officers across Texas. Randy was a long time member of First Baptist Church of Rusk and a faithful and committed servant of the Lord. Those closest to him will certainly remember him for his witty humor. Even in passing his humor was strong as he noted that he wanted inscribed on his headstone “Pardon me for not getting up to shake hands”. Because of Randy’s lifetime of service to the Lord and in law enforcement he was a believer in the prison ministry and getting bibles into the hands of those in need. Randy asked in lieu of flowers, memorials be made to First Baptist Church Rusk, Prison Ministry Bible Fund. Pallbearers will include Andrew Hatch, Tim Hatch, Steven Hodge, Logan Smith, Jeff Carroll and James Campbell. Honorary pallbearers will be Elmer Beckworth, Randy Rasberry, Larry Sinclair, Mark Jones, Bill Cromer and Luis Cox. Visitation will be from 9:00 a.m. up to service time, Wednesday, March 3, 2021 at First Baptist Church in Rusk.

The family of Randy Vernon Hatch created this Life Tributes page to make it easy to share your memories.

A funeral service for Randy Hatch, age 67, of Rusk is scheduled...

Send flowers to the Hatch family.