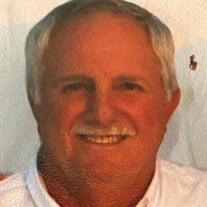 Michael Conway Byrd, 72, passed away November 15, 2021, on his farm in Reklaw TX. He was born July 5, 1949 in Jacksonville, TX to the late Cecil “Buddy” & Faye Byrd. Mike grew up in Reklaw and graduated from Rusk High School in 1967. He attended Tyler Junior College, where he earned an Associates Degree in Electrical Engineering. In 1970, he married Carol Burton, to whom he was married for 51 years. Mike had a 38 year career with Texas Power & Light and Texas Utilities. Mike was also a rancher for most of his life. He enjoyed hunting and fishing, but most of all he loved working on the farm and spending time with his family. Mike had a strong work ethic and not only enjoyed working on his projects, but also the projects of friends and neighbors. He was a member of Rusk Church of Christ. He is preceded in death by his parents and his brother Ricky Byrd. He is survived by his wife, Carol Byrd; sons, Michael (Jondalyn) and Wesley (Desiree) Byrd; sister, Cathy (Homer) Goolsbee; six grandchildren, Emily, Jackson, Avery, Mackenzie, Caroline, and Shelby; an extended family of cherished in-laws, cousins, nieces, nephews and friends. A funeral celebration of Mike’s life will be 2:00 p.m., Monday, November 22, 2021, at Rusk Church of Christ under the direction of Wallace-Thompson Funeral home with Robby Arrington officiating. Burial will follow at Walkers Chapel Cemetery, Reklaw, Texas. Visitation will be one hour prior to the service beginning at 1:00 p.m. A gift in his name may be made to the Rusk Church of Christ Building Fund, 397 South Main Street, Rusk, TX 75785.

The family of Michael Byrd created this Life Tributes page to make it easy to share your memories.

Send flowers to the Byrd family.