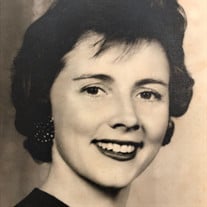 Graveside services for Mary Guinn will be 11:00 a.m., Tuesday, March 15, 2022 at Cedar Hill Cemetery, under the direction of Wallace-Thompson Funeral Home. Ms. Guinn (“Mary Ethel”) was born in Rusk Texas on February 27, 1933, to proud parents Eleanor Rebecca Guinn and Pope Aycock Guinn. She spent a wonderful childhood roaming Guinn Hill and riding her horse Betsy around, including to Rusk Elementary School. She graduated Rusk High School in 1951 and went to Texas Women’s University where she was awarded a teaching degree in 1955. She taught English and P.E. to students of all ages for the next 50 years. While teaching and living in Colorado Springs, Colorado, Mary met Ken Felts. They were married on June 1, 1963. During the 1960s and 1970s, she was on the forefront of women’s rights in athletics, including being one of the first women to run the Pike’s Peak Marathon. During her life, she played and coached basketball, swimming, tennis, field hockey, lacrosse, soccer, cross-country and track. On March 26, 1972, Ken and Mary welcomed their daughter Rebecca Ruth Felts into the world. Like Mary, “Becca” loved sports and she and her mom did many of them together. In the winter, they would ice skate, ski, sled and have snowball fights. In the summer, they did soccer, tennis, field hockey and running. During this time, Mary also discovered the religion of Christian Science, which she studied and followed for the rest of her life. In 1980, Mary and Ken divorced. After a few more years in Colorado, Mary moved back to Texas. Over the next 30 years, she lived and taught all over the Western United States, including Washington, Idaho, Arizona, and New Mexico. Everywhere that she lived, she started Field Hockey and Lacrosse groups. She taught hundreds of people to play these games over the years. Mary’s daughter Rebecca married Tracie Mayes in 1995. In 2005, Mary’s first grandchild, Alexander Kenneth Mayes was born. In 2008, her granddaughter Sara Rebecca Mayes was born. She loved and enjoyed Tracie and the kids very much. In 2015, it became clear that Mary could no longer live independently. She moved into a nursing home in Arvada, Colorado, 3 miles from her daughter’s family. She was known for doing “laps” all around the nursing home halls, leading exercise classes and for loving to watch the Broncos and Rockies games with Rebecca. She passed away on March 9th, 2022. In lieu of flowers, please contribute to your local animal shelter.

The family of Mary Ethel Guinn created this Life Tributes page to make it easy to share your memories.

Send flowers to the Guinn family.