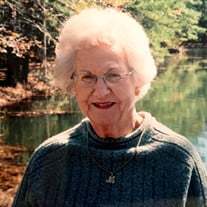 A funeral service for Martha Nan Richards, age 88, is scheduled for 11:00 a.m., Saturday, February 17, 2018 at the Atoy First United Methodist Church with Rev. Mark Richards officiating. Burial will follow at Atoy Cemetery. Visitation will be from 10:00 a.m. up until service time on Saturday. Martha Nan Ingram was born on June 12, 1929, in Weldon, Texas. She died on February 14, 2018, in Round Rock, Texas, at the age of 88. She was a long time resident of Atoy, and has lived in Round Rock for the last 26 years in the home of her daughter, Carol. She died at home, surrounded by her loved ones. Her daughters held her hands as she took her last breath. Martha is preceded in death by her husband, Chesley Olen Richards, her parents, John Coleman and Ivy Belle Oates Ingram, her sister and brother-in-law, Penny and Mary Campbell, and her nephew, Bradley Wayne Campbell. She is survived by a son, Mark Richards, and his wife, Kathy, of Lake Jackson, her daughter, Carol Hearn and her husband, Doug, of Round Rock, her daughter, Amy Richards, also of Round Rock, and her niece, Liz Buckner, of New Salem. Four grandsons, Josh Richards of Lufkin, Caleb Richards of Denver, Colorado, Michael Hearn of San Antonio, Allen Hearn of Galveston, and a granddaughter, Heather Hearn of Round Rock. She is also survived by three nephews and four nieces, whom she adored. Martha taught school in Santa Fe, San Antonio, Reklaw, and Rusk, for a total of 36 years. The love of her students was evident in the way she shared their stories with her family. She enjoyed gardening and spending time with friends, but the joys of her life were her children and grandchildren. She felt blessed to have been able to live near all of her grandchildren when they were young. Martha met her sweetheart at Sam Houston State Teachers College, in Huntsville, Texas, in 1949. They were introduced by a mutual friend, and the love of her life was digging for worms when she met him. By the time she got back to her dorm, he was calling to ask her on a date. They married on November 17, 1951, and were married until Chesley’s death, in 1980. Alfred, Lord Tennyson wrote, “Our echoes roll from soul to soul, and grow forever and forever.” This describes Martha’s legacy of love and kindness. If you would like to donate in Martha’s honor, please consider Standards Hospice of Cameron, Texas. standardshospice.com

The family of Martha Nan Richards created this Life Tributes page to make it easy to share your memories.

A funeral service for Martha Nan Richards, age 88, is scheduled...

Send flowers to the Richards family.