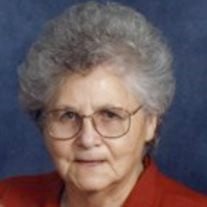 Funeral services for Marie R. Powers, age 85, of Whitehouse are scheduled for 11:00 a.m., Monday, March 24, 2014 in Wallace-Thompson Funeral Home Chapel with Rev. Tommy Earl Burton officiating. Interment will be in Shiloh Cemetery under the direction of Wallace-Thompson Funeral Home in Rusk. Mrs. Powers passed away March 21, 2014 in a Tyler hospital. She was born January 18, 1929 in Cushing, Oklahoma. Mrs. Powers had been a resident of Whitehouse since 1990 formerly of Lubbock, TX. She was a loving wife, very creative, enjoyed arts and crafts, holiday gatherings and decorating her home seasonally. She was an active member of the Walnut Grove United Methodist Church in Whitehouse and loved spending time with her children, grandchildren and great grandchildren. She was preceded in death by her parents, Jess A. and Pernecia Ann Fogelman Rogers. She is survived by her husband of 68 years, Bill Powers of Whitehouse, daughter and son-in-law, Sheila and Lemar Porter of Austin, TX, son and daughter-in-law, Steve and Kellie Powers of Jacksonville, five grandchildren, Natalie Wood of Austin, Noelle Whitner and husband John of Leander, TX, Zach Powers and wife Mandy of Rusk, Karlie Carter and husband Brian of Flint, Corey Powers and wife Daphne of Katy, TX, six great grandchildren, Lexie, Kylee and Zoe Powers of Rusk, Ellarie Carter of Flint, Annaliess and Kase Powers of Katy. Pallbearers will include family and friends. Visitation will be from 2:00 p.m. to 5:00 p.m., Sunday, March 23, 2014 at the funeral home.

The family of Marie R. Powers created this Life Tributes page to make it easy to share your memories.

Funeral services for Marie R. Powers, age 85, of Whitehouse are...

Send flowers to the Powers family.