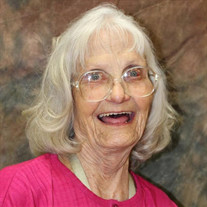 Lois Pierce was born March 31, 1928 in Rusk, Texas to Leonard Penn and Mary Ida Johnston Halbert. Lois went to be with her Lord and Savior, on December 15, 2017 at the age of 89, almost 90 years old, in Tyler, Texas. Preceding her in death along with her parents, were her sisters, Lyndall Gage, Gwendolyn Wood, and Lucille Crews. Lois grew up working on the family farm. She was a great story teller and shared many tales of her father’s, aunts’ and siblings’ work on the farm trying to make a living during the depression and World War II. She attended grade school at Oakland School and graduated from Dialville School in 1945. Lois married her sweetheart, James Russell Pierce on September 4, 1948. They were married for 49 years before the Lord called Russell home on June 14, 1998. They lived in Texas City for a number of years before returning to east Texas. They raised cattle on a ranch west of Jacksonville for several years before moving to the Oakland community. Lois was a whiz with numbers and worked at several banks before finishing her career at Lon Morris College. Lois came to know Jesus Christ as her Savior as a young person. She and Russell were faithful members of Oakland Missionary Baptist Church. She was a cherished aunt who shared her love of Jesus with her nieces, nephews, great-nieces and nephews, and great-great nieces and nephews, often taking the local nieces and nephews to Vacation Bible School. She made a great impact for God’s kingdom during her lifetime. She is survived by her brother and sister-in-law, L.P. and Martha Halbert, brother-in-law, Truman Crews, many nieces and nephews, cousins, and a host of friends. She will be deeply missed by all who knew her. The family wishes to thank Angelina House staff for their loving care of Lois for over 5 years and to Hospice of East Texas staff for their compassionate care in her final days. Lois’ visitation service will be held on Saturday, December 16, 2017 at the Wallace-Thompson Funeral Home Chapel in Rusk from 5-7 pm. Her funeral service will be held on Sunday, December 17, 2017 at the Wallace-Thompson Funeral Home Chapel at 2 pm with Rev. Don Copeland and Rev. Dustin Slaton officiating. Burial will be at Oakland Cemetery. In lieu of flowers, memorial gifts may be made to Oakland Cemetery or Hospice of East Texas. Pallbearers: Stephen Halbert, Casey Gates, Ronny Gates, Dusty Arrington, Buddy Rawlinson, Drew Kimbrell, Brady Kimbrell. Honorary Pallbearers: Dale Crews, Kenneth Gates, Russell Burtch, Dwayne Kimbrell.

Lois Pierce was born March 31, 1928 in Rusk, Texas to Leonard Penn and Mary Ida Johnston Halbert. Lois went to be with her Lord and Savior, on December 15, 2017 at the age of 89, almost 90 years old, in Tyler, Texas. Preceding her in... View Obituary & Service Information

The family of Lois Mildred Halbert Pierce created this Life Tributes page to make it easy to share your memories.