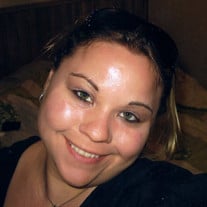 Funeral Services for Kendra Louise Banks, age 35 of Rusk, TX are scheduled for 11 a.m., Tuesday, September 2, 2014 at Wallace Thompson Funeral Home Chapel with Moody Glass officiating. Interment will be at Cedar Hill Cemetery in Rusk under the direction of Wallace Thomson Funeral Home in Rusk. Miss Banks passed away August 30, 2014 in a Tyler Hospice. She was born December 13, 1978 in Henderson, TX. She was a member of East Side Baptist Church in Rusk. She adored children and loved quilting and arts and crafts. She is survived by her parents, Edgar and Colleen Banks III of Rusk, son Zachary Thomas Banks of Rusk, her brother and sister-in-law Christopher and Becca Banks of Rusk, grandparents Bonnie Banks of Rusk, Carson and Evon Corrigan of Havre, Montana, as well as numerous nieces and nephews, aunts and uncles. Pallbearers will include Jason McClaine, Clint Brock, Nick McCarley, Matt McCarley, John Roycroft and Rob Caruthers. Honorary pallbearers will be Wayne Brock and Justin Duke. Visitation will be from 5 p.m. to 8 p.m., Monday, September 1, 2014 at the funeral home.

The family of Kendra Louise Banks created this Life Tributes page to make it easy to share your memories.

Send flowers to the Banks family.