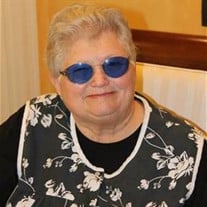 Funeral services for Kay Parker Norton, age 70, of Rusk, are scheduled for 11:00 a.m., Friday, October 2, 2015 at Wallace-Thompson Funeral Home in Rusk with Rev. Don Copeland officiating. Graveside services will be at the Kilgore City Cemetery in Kilgore TX at 3:00 p.m. following the morning services, Pastor Brandon Cochran officiating. “Ms. Kay,” as she was known by everyone, passed away September 28, 2015 at her residence. She was born in Henderson TX on October 14, 1944 to the late Travis Christopher Parker and Alta Florine Rousseau. She was raised in the Elder community across from Elder school in Kilgore. There was a small store, not far from the house called "Pop Gaines" where she would walk or ride her bike to get a Coke and Peanuts for 10 cents. (The peanuts would have a penny, nickel, dime or even a quarter if you were lucky) She attended Elder Farm first thru sixth grade then to Kilgore High where she graduated in 1964. While in high school she worked in the concession stand at the Kilgore drive-in theater. After high school she meet and married Curtis Lee Norton of Rusk where she began and worked for the Rusk State Hospital for 30 plus years. Her favorite passion was coaching and refereeing soccer for the Jacksonville Youth Soccer Association and visiting with her many friends and relatives. She was preceded in death by her father, Travis Christopher Parker. Survivors include, mother, Flo Parker Harris of Kilgore, TX, son and daughter-in-law, Tony and Aimee Norton of Rockwall, TX, daughter and son-in-law, Angie and David Foreman of West Point, TX, grandchildren, Britani Caplick, Shaun Caplick, Jace Norton all of Rockwall and Avery Foreman of West Point, two brothers and sisters-in-law, Joe and Sherren Parker of Kilgore, Clyde and Laura Parker of Tatum, TX, sisters and brothers-in-law, June and Joe David Clark of Kilgore, Jennifer and Mike Brown of Kilgore, TX and brother, Darrell Parker of Dallas, and numerous nieces and nephews. Family and friends will serve as pallbearers. Visitation will be from 9:00 a.m. up until service time, Friday, October 2, 2015 at the funeral home.

The family of Kay Parker Norton created this Life Tributes page to make it easy to share your memories.

Funeral services for Kay Parker Norton, age 70, of Rusk, are...

Send flowers to the Norton family.