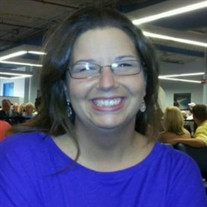 A Celebration of Life service for Judia Sanders Husband, 42, of Jacksonville, will be 2:00 p.m., Thursday, October 1, 2020 at the Wallace-Thompson Funeral Home Chapel with Bro. Jack White officiating. Judy’s hard fought battle with her illness ended September 27, 2020. She was born March 23, 1978 in Houston, Texas to Harold and Ginger Sanders. She was known for her kindness and being shy; she was a private person. She was known for being able to fix most things in creative ways. While she enjoyed going on cruises and traveling to new ports of call each time, her true joy was found in spending time with her family, whom she loved more than anything else. She will be missed by her dog Honey. And she was known for dancing to her own beat when she thought no one was looking. She cherished time spent with her sister April as they were also best friends. Judy lived her life by the quote, "Life isn’t measured by the number of breath’s you take, but the number of moments that take away your breath.” She is survived by her parents, husband of 23 years and the love of her life Jason Husband of Jacksonville, her 2 children Justin and Jessica Husband, oldest sister Kimberley and her husband Marvin Taylor of Conroe, sister April Davis of Lufkin, best friend Janet McLeroy of Nacogdoches, youngest sister Janet Sanders of Florida, brother Stephen Michael and his wife Rebekah Findley of Tuscaloosa, AL, nieces Hailey and Brinlee, nephews J.J., Dylan, Cayden, Ethan, Grayson, and Oliver. The family of Judy would like to extend a special thank you to those who have supported her throughout her battle including the Cherokee County Attorney’s office, the HOPE cancer center including Dr. Lee, Gretchen, Bill, Wendy, Linda, and especially Abby. Visitation will be 12 noon until service time, Thursday, October 1, 2020 at the funeral home.

The family of Judia Sanders Husband created this Life Tributes page to make it easy to share your memories.

A Celebration of Life service for Judia Sanders Husband, 42,...

Send flowers to the Husband family.