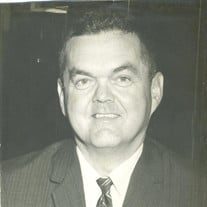 John Perkins Hunter, 93, died peacefully in his sleep early Monday morning, February 16, 2015, in Tyler, Texas. John was born February 4, 1922 in Diboll, Texas to Clarence and Mary Ethel Hunter. The family lived in Fastrill, Texas, a Southern Pine Lumber company town, for several years and then moved to Rusk, Texas. John Hunter joined the United States Marine Corps in 1942. He was stationed in the New Herbrides Islands where he served as a radar operator. John was honorably discharged as a Sergeant in November of 1945. After the war, John gained employment with the United States Postal Service in Rusk, where he worked for twenty-six years. Assistant Postmaster John Hunter retired in 1972 at the age of 50 and he loved it! John was a religious man and he always helped others. He was an Elder of the First Presbyterian Church in Rusk. John was a good man, a great uncle, a mentor, and a friend. And all critters, no matter how ornery, liked him. John is survived by a sister-in-law, Pauline Hunter of Houston, nephews, Steve, Brad, and Gready Hunter, nieces Toni Heagerty, Mary Ethel Guinn of New Mexico, four great nephews, two great nieces, and two great great nieces. John Hunter had many friends and acquaintances, and the consensus of all is this, Mr. John P. Hunter was a gracious gentlemen and a good guy. A memorial service is scheduled for 1:00 p.m., Saturday, February 21, 2015 at First Presbyterian Church in Rusk with Rev. David O'Neal officiating. A private burial will be held before the service at Cedar Hill Cemetery. There will be no visitation.

The family of John Perkins Hunter created this Life Tributes page to make it easy to share your memories.

Send flowers to the Hunter family.