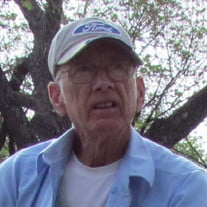 Graveside services for Jerry V. Clakley, 74, of Ponta, Texas will be 10:00 a.m., Wednesday, April 13, 2016 at Walker Chapel Cemetery with Bro. Robert Burns officiating under the direction of Wallace-Thompson Funeral Home. Mr. Clakley was born in Jacksonville, Texas on May 7, 1941 to the late Curtis and Lorene Clakley. He spent his life serving others as a nurse and served in the U.S. Army. He was a member of Church of Christ, Jacksonville. He loved to fish catfish and crappie as well as hunting deer. He also spent many hours singing and playing country music on his guitar. He is predeceased by his parents, wife, Clista Clakley, son, Lance Clakley, and grand-daughter, Devin Clakley, brother, Teddy Clakley, and sister, Wanda Buckley. He is survived by his son and daughter-in-law Craig and Alisa Clakley, Alvarado, TX, daughter and son-in-law Shawn and Marnie Scott, Round Rock, TX, many loving grandchildren, sisters, Linda Kinney, Tyler, TX, Donna Perry, Jacksonville, TX. Visitation will be 5:00-7:00 p.m., Tuesday, April 12, 2016 at the funeral home.

The family of Jerry V. Clakley created this Life Tributes page to make it easy to share your memories.

Send flowers to the Clakley family.