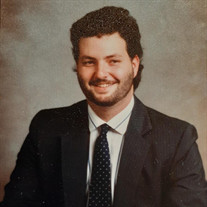 Private Family Graveside Services for Jason Darren Ellis of Frisco, TX are scheduled for 11:00 a.m., Tuesday, May 19th, 2020 at Oakland Cemetery with Bro. Don Copeland and David Haines officiating. Darren was born Feb 26,1966 in San Antonio, TX. He was very close to his mother Nelda Ellis of Jacksonville, TX. They talked daily several times a day. He was a graduate of Robert E. Lee High School in Tyler, TX. He was a member of Green Acres Baptist Church in Tyler where he sang in the Children's Choir and grew in the many activities with his age group. Darren attended Tyler Jr. College then on to Stephen F. Austin University in Nacogdoches and graduated with a Bachelor's of Business Administration and Computer Information Systems. He was in Who's Who in American Jr. College Young Community Leaders of America, Baptist Student Council, Mensa Phi Theta Kappa and SFA Drama Dept. He loved his cats and was an avid comics fan. Darren was preceded in death by his Aunt Dorla Johnston. He is survived by his mother, Nelda Ellis of Jacksonville, cousins Jana Birdwell of Hudson, CO, Kenny and Rhonda Birdwell of Rusk, father Floyd Ellis, step-mother Laverle Ellis, step-brother Todd Ellis, step-sisters Julie Jesceppu and Susannah Burneu, cousins Leslie and Brittany Birdwell, Elissa and David Robbins, Kaylee Birdwell, Kennon Birdwell and Dillon Birdwell all of Rusk. Pallbearers will include Kenny Birdwell, Leslie Birdwell, Kennon Birdwell, Dillon Birdwell, David Robbins and Todd Ellis. An honorary pallbearer will be Jana Birdwell. Contributions may be made to the Oakland Cemetery Fund in Darren's honor.

The family of Jason Darren Ellis created this Life Tributes page to make it easy to share your memories.

Send flowers to the Ellis family.