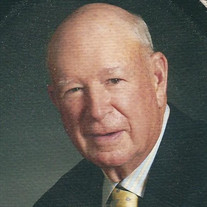 A funeral service for Hugh Milo McKean, age 86, of Rusk is scheduled for 2:00 p.m., Friday, April 6, 2018 at the Wallace-Thompson Funeral Home Chapel with Rev. Bart Reddoch officiating. Burial will follow at Cedar Hill Cemetery. Mr. McKean passed away April 3, 2018 in Rusk. He was born May 20, 1931 in Fort Wayne, Indiana to the late Hugh and Viola Scott McKean. Mr. McKean moved to Florida as a child and graduated from the University of Miami. He served in the United States Army and soon after met Nancy Brewer who would later become his wife. They lived in Houston for 13 years where he worked as an economist at Signal Oil and Gas. He and Nancy later moved to Rusk where he was a rancher and had a long time beef cattle and hay operation on their property. He was also employed by and retired from the United States Postal Service. He was preceded in death by his parents and his wife of 57 years, Nancy McKean. He is survived by his niece and her husband, Darlene and David Myers of Rusk and his nephew and his wife, Robert and Gina Duncan of Denver, Colorado. Pallbearers will include Johnny Patrick, Robert Harder, Robert Kindle, Chris Sidnell, Jim Perkins and Charles Hassell. Honorary pallbearers will be John Birkelbach, Lester Hughes, Apolinar S. Correa, James I. Perkins Jr. and Wayne Guinn. Visitation will be from 1:00 p.m. up until service time, Friday, April 6, 2018 at the funeral home. If desired, donations may be made to The Arbors Health and Rehabilitation Center or to The Visiting Angels of Tyler, TX.

The family of Hugh Milo McKean created this Life Tributes page to make it easy to share your memories.

A funeral service for Hugh Milo McKean, age 86, of Rusk is scheduled...

Send flowers to the McKean family.