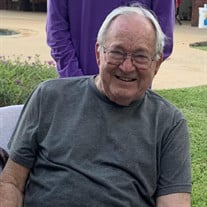 A funeral service for Howard William Loden, age 88, of Rusk is scheduled for 2:00 p.m., Thursday, September 16, 2021 at the Wallace-Thompson Funeral Home Chapel with Rev. Mike Bradford officiating. Burial will follow at Atoy Cemetery. Mr. Loden passed away September 12, 2021. He was born August 8, 1933 in Rusk to the late Orbie and Leona Helm Loden. Mr. Loden was a lifelong resident of Rusk and a member of the Atoy Baptist Church. He worked for AMPI many years as a salesman. He serviced dairies, and eventually operated his own. He had a passion for cows and ranching. He enjoyed fishing, hunting, and spending time with his family. He was preceded in death by his parents and a brother, Burnice Loden. He is survived by his wife of 59 years, Joyce Loden of Rusk, daughter and son-in-law, Anita Woodlee-Roach and Cody of Rusk, daughter, Lisa Hensley of Rusk, grandchildren, Kayla Morgan and husband Zach of Round Rock, TX, Mason Woodlee of Rusk, Jacob Woodlee of Rusk, Lara Hensley of Rusk, Jordan and Morgan Roach of Maydelle, great grandson, Holden Roach, three sisters, Lola Shuptrine of Rusk, Opal Cariker and husband Bud of Rusk, Bevia Sides of Rusk and many nieces and nephews. Visitation will be from 1:00 p.m. up until service time, Thursday, September 16, 2021 at the funeral home.

The family of Howard William Loden created this Life Tributes page to make it easy to share your memories.

A funeral service for Howard William Loden, age 88, of Rusk is...

Send flowers to the Loden family.