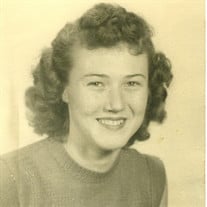 A funeral service for Glenda Littlejohn, age 86, of Rusk is scheduled for 10:00 a.m., Tuesday, January 7, 2020 at the Wallace-Thompson Funeral Home Chapel with Rev. Don Copeland officiating. Mrs. Littlejohn passed away January 2, 2020. She was born February 25, 1933 in Ponta, TX to the late Herman Bobbitt and Mina Sipper Bobbitt. Mrs. Littlejohn was a resident of Rusk most of her life and graduated from Rusk High School in 1950 as class salutatorian. She also graduated from Henderson County Junior College with an Associate of Science Degree in 1958 and worked as a nurse for Rusk State Hospital for 37 years. Mrs. Littlejohn was a member of the Ponta Church of Christ and served on the Board of Directors for the Southern Cherokee Federal Credit Union. She was preceded in death by her parents, husband, Harold Littlejohn and two brothers, Byron and Myron Bobbitt. She is survived by two sons and daughters-in-law, Larry and Martie Littlejohn of Beaumont, TX, Paul and Lynn Littlejohn of Bullard, TX, four grandchildren including Kim Moss and husband Nolan of Spring, TX, Steven McClellan and wife Jennifer of Tyler, TX, Samantha Sanchez and husband Tom of Cypress, TX, Sydney Watkins and husband Alex of McCalla, AL, eight great grandchildren, and three sisters, Mary Nell Wofford of Ponta, LaQuita Dees of Rusk and Janeita Traylor of Tyler. Honorary pallbearers will be James Lloyd, Gary Cornelius, Alan Akin, Gregg Wofford, Kevin Dees and Don Littlejohn. Visitation will be from 6:00 p.m. to 8:00 p.m., Monday, January 6, 2020 at the funeral home.

The family of Glenda Littlejohn created this Life Tributes page to make it easy to share your memories.

A funeral service for Glenda Littlejohn, age 86, of Rusk is scheduled...

Send flowers to the Littlejohn family.