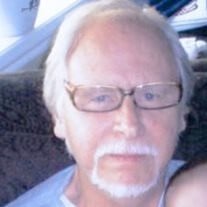 Funeral services for Gerald Francis Meharry, age 75, of Rusk, are scheduled for 1:00 p.m., Sunday, February 23, 2014 in Wallace-Thompson Funeral Home Chapel with Pastor Richard Rose officiating. Interment will be in Cedar Hill Cemetery under the direction of Wallace-Thompson Funeral Home in Rusk. Mr. Meharry died February 19, 2014 in a Tyler hospice. He was born April 9, 1938 in Boring, Oregon to the late Robert Alfred and Frances Lovina Ordahl Meharry. Mr. Meharry was a resident of Rusk since 1976 and served in the United States Army in the Medical Corps. He was a retired Therapist Technician from Rusk State Hospital, was a master carpenter and made beautiful bookcases. Mr. Meharry also worked as a logger in Alaska and was a Certified Dental Technician. He was a member of the Rusk Seventh Day Adventist Church. He was preceded in death by two brothers, Melvin Meharry, Dr. LeRoy Meharry formerly of Rusk. He is survived by his wife of 37 years, Belinda Meharry of Rusk, daughter and son-in-law, Marchelle and Don Smith of Tolland, CT, two sons and daughter-in-law, Gerald II and Kristin Meharry of Flint, TX, Kirk Meharry of Tyler, one granddaughter, Olivia Taylor of Flint, four brothers including Dr. Roger Meharry formerly of Rusk, three sisters, numerous nieces, nephews, grand nieces and nephews and cousins. Family and friends will serve as pallbearers. Visitation will be from 5:00 p.m. to 7:00 p.m., Saturday, February 22, 2014 at the funeral home.

The family of Gerald Francis Meharry created this Life Tributes page to make it easy to share your memories.

Send flowers to the Meharry family.