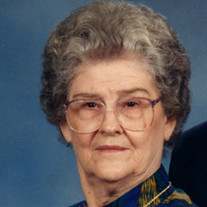 Graveside services for Flora Mae Jones, age 97, of Rusk are scheduled for 11:30 a.m., Saturday, August 23, 2014 in Russell Cemetery with Rev. Don Copeland officiating under the direction of Wallace-Thompson Funeral Home in Rusk. Ms. Jones passed away August 21, 2014 in a Rusk nursing home. She was born July 10, 1917 in the Priscilla Community in Houston County, TX to the late Bennie and Willie Coleman Mitchell. Ms. Jones was a resident of Rusk all her adult life and a member of the First United Methodist Church in Rusk. She was the last surviving member of the Earnest Worker Sunday School class and the oldest resident at Cherokee Trails Nursing Home in Rusk. Ms. Jones worked at Zero Food Locker, Matthews-Miller and Baskins Department stores in Rusk. She loved to sew, crochet and was considered the best cook in Cherokee County by many. She was preceded in death by her husband, Frank Jones, two sisters and three brothers. Survivors include two sons and daughters-in-law, Charles and Sara Jones of Rusk, Don and Cathy Jones of Rusk, grandson, Waylon Jones and wife Chrissy of Rusk, granddaughter, Laura Redden and husband Roger of Rusk, grandson, Mark Reneau and wife Kelly of Ben Wheeler, TX, grandson, John Reneau of Longview, TX, granddaughter, Fantasy Belt of Houston, TX, great grandson, William Jones and wife Amber of Rusk and numerous nieces and nephews. Family and friends will serve as pallbearers. Visitation will be from 10:00 a.m. to 11:00 a.m., Saturday, August 23, 2014 at the funeral home.

The family of Flora Mae Jones created this Life Tributes page to make it easy to share your memories.

Send flowers to the Jones family.