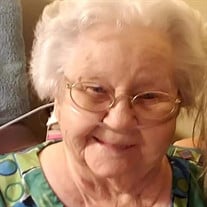 Funeral Services for Evelyn Martin Middleton, 96, of Rusk will be 3:00 p.m., Thursday, October 25, 2018 at the Wallace-Thompson Funeral Home Chapel with Bro. Don Copeland officiating. Burial will follow at Salem Cemetery, Rusk, Texas. Mrs. Middleton passed away October 21, 2018 after a lengthy illness. She was born March 27, 1922 in Rusk, Texas to the late T.C. and Corine Alexander. She spent her career as a cashier and trainer for Brookshire Brothers and retired from there after 35 years of service. She was also a member of Atoy Baptist Church. She enjoyed spending her free time crocheting and quilting. She loved going to play the penny slot machines with Pop and was quite successful. She enjoyed fishing on the pond and was an avid domino player; she was known for being difficult to beat. She is predeceased by her parents, husbands, Tommie Martin, and Olis Middleton, son, Kenneth Martin, numerous brothers and a sister. She is survived by her children, Tommie Dean and his wife Susie Martin of Nacogdoches, Janis and her husband Rick Brooks of Rusk, Connie and her husband Robert Catalani of Rusk, grandchildren, Kenny and his wife Amy Martin of The Woodlands, Deanna and her husband Clint Childress of Pollock, Amy and her husband Kenny Honeycutt of Palestine, Jereme and his wife Wendy Martin of Cushing, Ben Parsons of Kilgore, Richard and his wife Jaime Brooks of Snow Hill, North Carolina, Michael and his wife Megan Brooks of Rockport, and many loving great-grandchildren. Visitation will be 4:30 p.m. to 6:30 p.m., Wednesday, October 24, 2018 at the funeral home.

The family of Evelyn Martin Middleton created this Life Tributes page to make it easy to share your memories.

Funeral Services for Evelyn Martin Middleton, 96, of Rusk will...

Send flowers to the Middleton family.