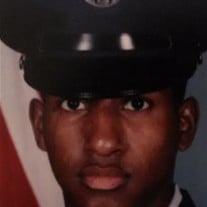 Funeral services for Eric J. Plair, 55, of Arlington, will be 2:00 p.m., Saturday, January 19, 2019 at the Wallace-Thompson Funeral Home Chapel with Nicholas Lloyd officiating. Visitation will be 1:00 p.m. until service time. Mr. Plair passed away from an accident. He was born in New York, New York, April 15, 1963 to John Plair and the late Dorothy Plair. He graduated North Garland High School, Garland, Texas and entered the Air Force and left as a Sergeant. He was an avid body builder and placed 8th in the Mr. America competition. He loved riding motorcycles and was very into healthy living and diet. He is survived by his father, daughters, Amnia Plair of Altus, OK, Jayla Plair of Ft. Worth, grandchildren, Na'riyah Polk of Ft. Worth, brother, Vincent Plair of Los Angeles, CA, sisters, Regina of New York City, Sara of Raleigh, NC, and Sheila Ford of New York City.

The family of Eric J. Plair created this Life Tributes page to make it easy to share your memories.

Funeral services for Eric J. Plair, 55, of Arlington, will be...

Send flowers to the Plair family.