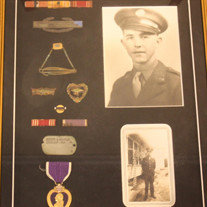 A graveside service for Emmett Carlton Holcomb, age 96, of Rusk is scheduled for 1:00 p.m., Monday, January 18, 2021, at Holcomb Cemetery in the Bulah Community with Johnny Rainey and Charles Nunnally officiating. Mr. Holcomb passed away January 15, 2021, in Rusk. He was born February 24, 1924, in the Bulah Community to the late Harvey and Norene (Coleman) Holcomb. Mr. Holcomb was a lifelong resident of Bulah Community and a member of the Adams Chapel Methodist Church. He served in the United States Army in World War II in the Philippine Islands and earned several medals including a Purple Heart. Mr. Holcomb grew up farming and eventually went into the construction business. He was a member of the infamous Sardis Cats baseball team. He also loved to hunt, fish and hunt for better places to fish. His family and friends have many fond memories of the fish frys he loved to have so he could go fishing again to catch more fish for his family. He was preceded in death by his parents, his wife, Martha Ray (Black) Holcomb, two of his sisters, Mamie Miller and Helen Cowart and his son, Robert Holcomb. He is survived by his son and daughter-in-law, Richard and Sherry Holcomb of Rusk, his daughter-in-law Elizabeth Holcomb of Rusk, his daughter and son-in-law, Johnnie and Susan Richey of Rusk, his sister, Mary Jane Wylie of Longview, TX, seven grandchildren including Missy and Chris Adams of Rusk, Cindy and Johnny Rainey of Rusk, Heath and Monica Holcomb of Cedar Park, TX, Heather and Brian Nichols of Canton, TX, Holly and Justin Lovell of Weches, TX, Jonathan and Ramey Richey of Rusk, Tara and Derek Diaz de Leon of Dallas, TX, eighteen great grandchildren, fourteen great great grandchildren, close cousins Nick and Jane Theodore of Keller, TX, and George Robert Holcomb of Rusk. Pallbearers will include grandsons Heath Holcomb, Jonathan Richey, Chris Adams, Brian Nichols, Justin Lovell, Derek Diaz de Leon and Andrew Houston. The family is deeply humbled and extremely grateful for "Heart to Heart Hospice" and all that they did not only for our dad, but all that they did for us, the family caregivers. The love, compassion, wisdom and tenderness of our dads hospice team for four years was truly a blessing to all of the family.

The family of Emmett Carlton Holcomb created this Life Tributes page to make it easy to share your memories.

A graveside service for Emmett Carlton Holcomb, age 96, of Rusk...

Send flowers to the Holcomb family.