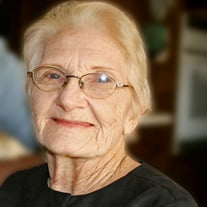 Funeral services for Dorthie Williams Hutto, 87, of Alto, will be 11:00 a.m., Monday, February 17, 2020 at the Wallace-Thompson Funeral Home Chapel with Bro. Kevin Gentry officiating. Burial will follow at Pleasant Grove Cemetery, Maydelle. Visitation will be 5:00 p.m. to 7:00 p.m., Sunday, February 16, 2020 at the funeral home. Dorthie Hutto went home to Jesus on February 11, 2020. She died peacefully at home. Dorthie was born to the late Lester and Gussie Williams on December 15, 1932 in Maydelle, Texas. In addition to being a dedicated and loving mother, Dorthie also was dedicated to her grandchildren and helped raise two of them. Throughout her entire life, she held an unwavering faith in God, which she shared with those who surrounded her. She lived in Houston until she retired from Southwestern Bell after over 28 years. She and her husband then moved back to East Texas to be closer to where they grew up and you would often find them at their produce stand off Highway 69. Dorthie joins in Heaven her husband Dale Hutto; her parents; step-son, Mike Hutto; brothers, Alton and Leslie Williams; sisters, Cassie Williams and Louise Garner. She is survived by children, Bobby Helm of Alto, Audrey and Jim Miller of New York, Joe Helm and Jimmy Woodard of Alto, Dawn McCubbins of Longview, Jeff and Renee Hutto of Waco; brother, Jack Williams of Cushing; sisters, Patsy Rowell of Wells and Katherine Lusk of Maydelle, 12 grandchildren; 11 great-grandchildren; and many nieces and nephews. How do you measure a life? By the diversity of people who have called, have written, and who celebrate the life of Dorthie. The family would especially like to acknowledge the care and support our brother, Joe, gave our mother, especially this last year. We learned from the palliative care nurse that is it not pain that affects the aged, but rather, a bone-crushing fatigue. Dorthie never outwardly showed that that the pain and fatigue were affecting her. She had a strength of mind I have never seen in anyone else and that made her such a special person to us. Pallbearers are Wayne Helm, Wes Priest, Gene Smiley, John Roycroft, Roy Rowell, and Donnie Lusk.

The family of Dorthie Williams Hutto created this Life Tributes page to make it easy to share your memories.

Funeral services for Dorthie Williams Hutto, 87, of Alto, will...

Send flowers to the Hutto family.