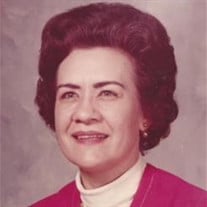 Doris Carter Dotson passed away peacefully Thursday, January 19, 2017. Graveside services will be at 11:00 a.m. Monday, January 23, at Cedar Hill Cemetery in Rusk, TX. Friends and family are invited to gather at 9:30 a.m. at Wallace-Thompson Funeral Home in Rusk for visitation prior to the burial. Doris was born Sept. 6, 1922, to William Edgar and Rose Eva Carter in Clayton, TX. She married Clifford Dotson Sept. 11, 1944, in Charleston, South Carolina, while Clifford was serving in the U.S. Army Air Corp. Son Ronald Cliff Dotson was born in Rusk, Dec. 7, 1945. The family moved to Palestine, TX. in 1949 where Doris was a stay at home mom. After Ronnie started school she worked as a secretary at Knox Glass and later at Palestine High School. She was a long standing member of the Harvey Club of Palestine. Clifford and Doris were original Charter Members of Crockett Road Church of Christ and served tirelessly at the church for more than 50 years. Clifford died in April 2003 and Doris moved to Longview, in September 2006 to be closer to family. Doris was the youngest of six children. Brothers Erus and Bill Carter, sisters Bobbie Allbright, Augusta Langston and Lois Hill preceded her in death. Family members left to cherish her memory are son Ronald and wife Marsha, of Longview, TX. ; grand-daughter Merideth Choate and husband Chance, of Prosper, TX. and grand-daughter Lindsay Cenkus and husband Rick, of Frisco, TX. Five great grandchildren include Graceton and Faithen Choate and Carter, Natalie and Erin Cenkus. Numerous nieces and nephews as well as great nieces and great nephews will remember Doris loved spending time with family. A special pleasure for Doris was shopping with sisters, sister-in-laws, daughter-in-law and grand-daughters as well as attending reunions that often included a gathering of more than 400 family members. The Dotson family would like to extend their appreciation to the caregivers at Heartis Memory Care Unit and the loving care of the personnel at Heartsway Hospice. Donations can be made to the Crockett Road Church of Christ in Palestine in Doris Dotson’s memory.

The family of Doris Carter Dotson created this Life Tributes page to make it easy to share your memories.

Send flowers to the Dotson family.