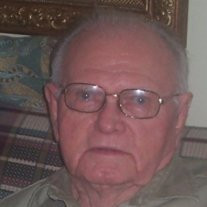 Funeral services for D.J. Gesford, age 93, of Rusk are scheduled for 2:00 p.m., Sunday, September 8, 2013 in Wallace-Thompson Funeral Home Chapel with Rev. Don Copeland and Clayton Poole officiating. Interment will be in E.L. Russell Cemetery under the direction of Wallace-Thompson Funeral Home in Rusk. Mr. Gesford passed away September 6, 2013 in a Rusk nursing home. He was born June 13, 1920 in Woodville, TX to the late John and Bama Gesford. Mr. Gesford was a resident of Rusk for 40 plus years. He served in the United States Army and Air Force during World War II. Mr. Gesford worked as a welder for the Texas Department of Transportation for 40 plus years and loved to eat, play 42, fish and visit with friends and family. He was a Christian and went home to be with his Heavenly Father. He was preceded in death by his wife of 60 years, Jessie Mae Gesford, son, John Thomas Gesford, brothers, Tom Gesford and Utah Gesford, sisters, Beatrice Pullen and Yvonne Ellis. Survivors include a daughter and son-in-law, Pat and Clayton Poole of Rusk, son and daughter-in-law, Dennis and Vickie Gesford of Rusk, daughter-in-law, Rose Marie Gesford of Tyler, five granddaughters, Michelle Henry of Houston, TX, Tonya Henry of Houston, Dana Gesford of Tyler, Stacie Cearley of Rusk, Stevie Gesford of Jacksonville, three grandsons, Jason Poole of Lufkin, Darrin Gesford of Jacksonville, Chad Gesford of Rusk, longtime friend and companion, Wanda Rawls, numerous nieces and nephews. Pallbearers will include Jason Poole, Darrin Gesford, Travis Cearley, Gerald Sword, Harold Sword and Tomrhea Sword. An honorary pallbearer will be Chad Gesford. Visitation will be from 1:00 p.m. up until service time, Sunday, September 8, 2013 at the funeral home. Special thanks to the Arbors Nursing Home and Solaris Hospice for the wonderful care provided.

The family of D.J. Gesford created this Life Tributes page to make it easy to share your memories.

Funeral services for D.J. Gesford, age 93, of Rusk are scheduled...

Send flowers to the Gesford family.