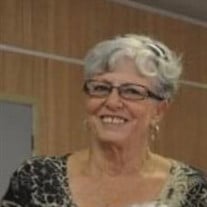 Deana Kay Henslee, “Dinky” or “Dee” as she was so lovingly named by her granddaughter, age 76, of Rusk passed away April 29, 2022 in Tyler. She was born February 21, 1946 in Jacksonville, TX to the late Patrick and Emodean Acker O’Byrne. She was a resident of Rusk since 1983 and graduated from Jacksonville High School in 1964. Mrs. Henslee worked as a Medical Technologist at Rusk State Hospital and Nacogdoches Memorial Hospital and was a Master Gardner. She thoroughly enjoyed her First Thursday Girl’s Club, family was number one to her and she was a good aunt. She was preceded in death by her parents, her husband, Eldon Gregory Henslee and brother-in-law, Michael Tillman. She is survived by two sons, Patrick Henslee and wife Sherri of Sanger, TX, Eric Henslee and wife Kim of Rusk, three grandchildren, Jared Lusk and wife Kourtney of Troup, TX, Jace Lusk and wife Brittney of Bullard, TX, Katelyn Henslee of Rusk, two great grandchildren, Judson Lusk of Troup, Lincoln Lusk of Bullard, sister, Christi Tillman of Rusk, niece, Allison Dotson and husband Kenneth of Rusk, nephew, Chad Parrott of Pearland, TX, great niece, Cassi Fletcher of Rusk, great nephew, Allen Dotson of Rusk, sisters-in-law, Joan Riddle and husband David, Sharon Henslee Frazier, several nieces and nephews on the Henslee side and numerous cousins. A graveside memorial service is scheduled for 10:00 a.m., Thursday, May 12, 2022 at Resthaven Cemetery in Jacksonville with Father Jorge Dingus officiating

The family of Deana Kay Henslee created this Life Tributes page to make it easy to share your memories.

Deana Kay Henslee, “Dinky” or “Dee” as she was so lovingly named...

Send flowers to the Henslee family.