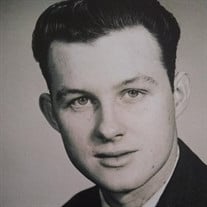 A military graveside service for David Patrick Smith, age 76, of Rusk is scheduled for 10:30 a.m., Friday, November 16, 2018 at the Houston National Cemetery. Mr. Smith passed away November 13, 2018 at his residence. He was born July 16, 1942 in Houston, TX to the late Albert P. and Josephine Irene Muyzka Smith. He was a resident of Rusk for the last 18 years formerly of Houston. He served in the United States Air Force and was a member of the Sacred Heart Catholic Church in Rusk. Mr. Smith was retired from Mrs. Baird’s and loved to fish. He was preceded in death by his parents, brother, John L. Smith, grandson, Hudson Folkerts. He is survived by a brother and sister-in-law, Daniel and Linda Smith of Houston, sister and brother-in-law, Donna and JoDee Johnson of Humble, TX, four daughters and son-in-law, Mandy and Kirk Folkerts of Tom Ball, TX, Deena Smith of Houston, April Shinn of Seabrook, TX, Patricia Smith of Rusk, two sons and daughters-in-law, David Patrick Jr. and Shelly Smith of Bryan, TX, Joshua P. and Melanie Smith of Katy, TX, grandchildren, Travis, Kolton, Landon, Payton, George, Presley, Hannah, Aiden, Cooper, Laycee, Georgia and several nieces and nephews. There will be no visitation.

The family of David Patrick Smith created this Life Tributes page to make it easy to share your memories.

Send flowers to the Smith family.