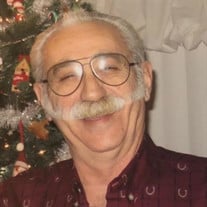 David Israel Gordon, 78, of Jacksonville, Texas passed away on January 5th surrounded by loved ones. He was born May 8th, 1940 in New York. Raised in California, David made a successful career working as a transportation coordinator for Warner Bros. Studios and later proudly worked at Roadway for many years where he reached a great milestone for driving one million miles with the company. While working on a film in East Texas, he met his beloved wife, Barbara, whom he would later move to Texas to be with. He loved keeping up with the news, working on his crossword puzzles, and reading books whenever he could. There is no doubt David was a strong willed and determined man, qualities that made him who he was. He was one of a kind and a gift to his family, a very caring and selfless man that would go out of his way to make sure his family was taken care of. He was a devoted husband and a wonderful step-father and grandfather. David will be cherished and greatly missed by all that knew him. David is survived by his wife Barbara Garner Gordon, step-sons Benny Garner, Tony Garner and his wife Linda, granddaughters Amber, Brittiney, and Taylor Garner, great grandchildren Shayna, Angle, Mia, Zoe Gamboa, Makayla Garner, Makenzie and Makeyln Horn. Funeral services are scheduled for 2:00 p.m. on Tuesday, January 8th at Russell Cemetery in Rusk, Texas where he will be placed to rest. Darrell Dement, his nephew, will officiate. David passed away suddenly of cancer that was too aggressive to treat. His family would like to thank Dr. Royal Becker and Homeplace Hospice who helped comfort his family and brought him peace in his last moments.

David Israel Gordon, 78, of Jacksonville, Texas passed away on January 5th surrounded by loved ones. He was born May 8th, 1940 in New York. Raised in California, David made a successful career working as a transportation coordinator for Warner... View Obituary & Service Information

The family of David Israel Gordon created this Life Tributes page to make it easy to share your memories.

David Israel Gordon, 78, of Jacksonville, Texas passed away on...

Send flowers to the Gordon family.