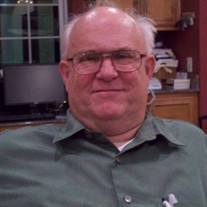 Graveside services for Dan Rankin, 72, of Rusk, will be 10:00 a.m., Saturday, August 14, 2021 at Pelican Cemetery, Commerce Street, Pelican, Louisiana under the direction of Wallace-Thompson Funeral Home with Pastor Mike Bradford officiating. Mr. Rankin passed away August 8, 2021. He was born June 7, 1949 in Alexandria, Louisiana to the late Daniel and Gertrude Rankin. He graduated high school in 1967, and graduated from Howard Payne University in Brownwood, TX in 1971. He was commissioned at Infantry Officer Candidate School in 1973 as a 2nd Lieutenant. He got his Master’s Degree from the School of Theology from Southwestern Baptist University in Ft. Worth, TX in 1979. He accepted Jesus as his Lord and Savior at the age of 15, and discovered his gift for teaching while in the Army. He served as Associate Pastor at East Side Baptist, where he was still teaching Sunday night Bible study. He was a history professor at SFA and Angelina College in Lufkin. August 1, 1981, he married Sherry and spent 36 years before she passed away. In 1983, they moved to Rusk. In 1989, he began as the interim pastor at Atoy Baptist Church. By 1991, he became the full time pastor. He is survived by his brothers Frank Rankin of Spring Branch, TX, Steven and Charlotte Rankin of Suffolk, VA, sisters, Jonnye and Danny Griffin of Knoxville, TN, Beverly and Walter Keener of Oswego, KS, countless nieces and nephews, as well as his church family. Visitation will be 6:00 p.m. to 8:00 p.m., Friday, August 13, 2021 at the funeral home. Donations may be made to the Gideons International, P.O. Box 97251, Washington, DC 20090

The family of Dan Rankin created this Life Tributes page to make it easy to share your memories.

Send flowers to the Rankin family.