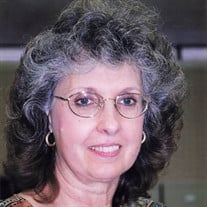 A celebration of life for Candace Marie Reneau, age 81, of Rusk is scheduled for 11:00 a.m., Monday, December 27, 2021 at the Wallace-Thompson Funeral Home Chapel with Bro. Robin Parsons officiating. Mrs. Reneau passed suddenly on December 20, 2021 from complications from a long hard fight with cancer. She was born January 16, 1940 in Ithaca, NY to the late Carlton and Lydia Laszlo Rumsey. Mrs. Reneau had recently moved to Rusk and had previously lived in Jackosonville. She attended the Gallatin Missionary Baptist Church. She co-founded the Women’s Barrel Racing Association in Ithaca, NY in the early 1960s and held the New York state record in barrel racing for several years. Some of the things she enjoyed were garage sales, yard work, refinishing furniture and going to the boats and she also was an avid antique dealer and was considered an amateur race car driver. She was preceded in death by her husband, Larry Reneau, son, Tim Harris and step-son, Chris Reneau. She is survived by her best friend and daughter, Kim Lloyd of Rusk, daughter-in-law, Vera Harris of Norman, OK, granddaughter, Stephanie James and husband Josh of Salpulpa, OK, grandson, Lucas Harris of Jenks, OK, grandson, Brad Hart and wife Andrea of Norman, grandson, Brandon Hart of Norman, granddaughter, Amber Featherstone of Blanchard, OK, nine great-grandchildren, three step-children, Larua Redden, Mark Reneau and John Reneau. Visitation will be from 10:00 a.m. to 11:00 a.m., Monday, December 27, 2021 at the funeral home. In lieu of flowers, donations may be made to St. Jude Children’s Research Hospital, https://www.stjude.org/donate/donate-to-st-jude.html or to a No Kill animal shelter of your choice.

The family of Candace Marie Reneau created this Life Tributes page to make it easy to share your memories.

A celebration of life for Candace Marie Reneau, age 81, of Rusk...

Send flowers to the Reneau family.