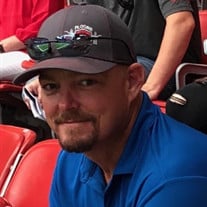 A graveside service for Brian Charles Posey, age 53, of Maydelle is scheduled for 2:00 p.m., Thursday, March 3, 2022 at West Shady Grove Cemetery with Rev. Ernest Higginbotham officiating. Mr. Posey passed away February 28, 2022. He was born February 2, 1969 in LaMarque, TX to Gordon and Carolyn Posey. Mr. Posey was a resident of Maydelle and was a hard working man that loved his family and would do anything for them. He worked in construction most of his life and loved hunting, fishing baseball and anything outdoors. He loved his son most of all. He was preceded in death by his father, Gordon Posey, an infant brother, grandparents, Travis and Mozelle Smith and Earl and Amelia Posey and brother-in-law, Robert Wilson. He is survived by his wife, Melissa Posey and son Travis of Maydelle, mother, Carolyn Posey of Ft. Worth, TX, sister, Rhonda Posey of Ft. Worth, father-in-law, Chris Wilson of Maydelle, mother-in-law, Anita Harris of Jacksonville, several nieces and nephews including Aaron Jones, Austin, Lilly and Jayden Wilson, Madison Fricault and many other family and friends. Pallbearers will include Aaron Jones, Joe Fricault, Shane Posey, John Garner, Matt Claiborne and Patrick Ezell. Honorary pallbearers will be David Claiborne and Tanner Ezell. There will be no visitation. In lieu of flowers, donations may be made to West Shady Grove Cemetery, 608 CR 1902, Jacksonville, TX 75766.

The family of Brian Charles Posey created this Life Tributes page to make it easy to share your memories.

A graveside service for Brian Charles Posey, age 53, of Maydelle...

Send flowers to the Posey family.