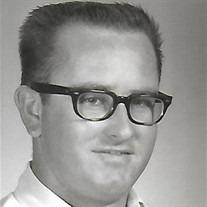 Bolton Malcome Hanson, Jr. Malcome passed away peacefully at home Sunday, August 16, 2015 after a long battle with heart disease. Malcome was born August 29, 1943 in Jacksonville, Texas to the late Bolton Malcome Hanson, Sr. and Doris Meador Hanson. He graduated from Rusk High School in 1961 and Stephen F. Austin State University in 1967 with a Bachelor of Science in Education. His passion was teaching and his career included teaching positions in Burkville ISD, Raymondville ISD, Shepherd ISD and Houston Community College. He was proud of coaching the debate team at Shepherd ISD to their first District win. Malcome retired from Houston Community College in 1999 and began work on his second passion, genealogy. Many happy hours were spent in the Cherokee County Courthouse researching and comparing notes with cousin and fellow genealogist, Garry Meador. Malcome loved his longtime friends and fellow classmates from the RHS class of 1961 and spent many happy times with them. He is survived by his loving family including his wife of 48 years, Rita; two sons: Bolton Eric Hanson of Tomball, Chris Hanson and wife Alaina of Austin; five grandchildren: Ashley Spencer of Kingwood, Olivia Grace Hanson and Baron Asher Hanson of Austin, Emily Elizabeth Hanson and Bolton Eric Hanson, Jr. of Tomball; sister, Freida Lloyd of Jacksonville and sister-in-law, Shirley Stephens of Rusk; several nephews and nieces and a host of lifelong friends. In August of 2007 Malcome received a heart transplant. We wish to thank Texas Heart Institute and especially the wonderful care of his Transplant Cardiologist, Roberta Bogeav, M.D. Malcome donated his body to the University of Texas Medical School for research. A celebration of life will be held at Wallace-Thompson Funeral Home in Rusk on Saturday, October 10th at 2 p.m. In lieu of flowers, memorials may be made to the RHS Alumni Association, P.O. Box 711, Rusk, Texas 75785.

The family of Bolton Malcome Hanson Jr. created this Life Tributes page to make it easy to share your memories.

Malcome passed away peacefully at...

Send flowers to the Hanson family.