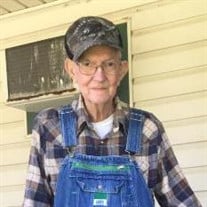 A graveside service for Bobby Jack Parsons, age 79, of Rusk is scheduled for 2:00 p.m., Friday, April 27, 2018 at Lowes Chapel Cemetery with Rev. R.S. Dyess officiating under the direction of Wallace-Thompson Funeral Home in Rusk. Mr. Parsons passed away April 26, 2018 at his home. He was born September 19, 1938 in Rusk to the late Liston and Bessie Christopher Parsons. Mr. Parsons was a lifelong resident of Rusk and worked as a carpenter for a few years with his family and later became a dairyman for most of his life. He was a member of Eastside Baptist Church and loved his family and the dairy life. He was preceded in death by his parents, sister, Catherine Kennedy, brothers, Douglas and Lum Parsons and son, Jeff Parsons. He is survived by a daughter and son-in-law, Vonda and Tommy Dosser of Rusk, son and daughter-in-law, Robbie and Karen Parsons of Rusk, daughter and son-in-law, Jennifer and Cole Emerson of Rusk, daughter-in-law, Davita Parsons of Rusk, sister-in-law, Ethel Parsons of Rusk, grandchildren, Mindi, Misti and Ken, Mandi and Derek, Mason and Christina, Sarah Jo and Bart, Katie, Josh, Harley, Hayden, Annie, Abby, Leighanna, Stover, Amber and Brittiney, eighteen great grandchildren and a host of nieces, nephews and cousins. Pallbearers will include Carson Wallace, Mason Couch, Josh Parsons, Peyton Brewer, Bart Clayton and Hayden Helm. Honorary pallbearers will be Jayce Couch, Alex Cheadle, Trayce Clayton, Stover Emerson, Richard and Coy Douglas and Trinton Fryar. Visitation will be from 1:00 p.m. up until service time, Friday, April 27, 2018 at Lowes Chapel Cemetery.

The family of Bobby Jack Parsons created this Life Tributes page to make it easy to share your memories.

A graveside service for Bobby Jack Parsons, age 79, of Rusk is...

Send flowers to the Parsons family.