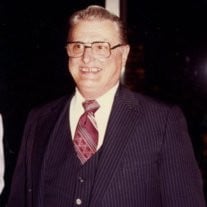 Graveside services for Bill Clark, age 86, of Rusk are scheduled for 11:00 a.m., Thursday, August 15, 2013 in Atoy Cemetery with Rev. Clint Johnson officiating under the direction of Wallace-Thompson Funeral Home in Rusk. Mr. Clark died August 12, 2013 at his residence. He was born February 4, 1927 in Denton, TX to the late Lloyd Isiah and Mary Beatrice Porter Clark. Mr. Clark was a resident of Rusk for 30 years, Methodist by faith and a loving father of four. He graduated from Brownwood High School and attended North Texas State College. He served in the United States Navy in the South Pacific during World War II, was a member of the Knights of Pythians, Kiwanis Club, Rotary Club and Executive Director of the United Way. Mr. Clark was also a Sunday school teacher and took nine canoe trips to Canada. He retired from Boy Scouts of America in 1984 and retired from the Salvation Army as a Field Rep. in 1997. He was preceded in death by his wife of 59 years, Betty Bott’r. Survivors include a brother, Robert Clark of Joshua, TX, three sons, Michael Clark of Colleyville, TX, David Clark of Angleton, TX, Thomas Clark of Wolfe City, TX, daughter, Cynthia Baldwin of Rusk, six grandchildren, seven great grandchildren, six nieces, one nephew, and many great nieces and nephews. Visitation will be from 5:00 p.m. to 7:00 p.m., Wednesday, August 14, 2013 at the funeral home.

The family of Bill Clark created this Life Tributes page to make it easy to share your memories.

Graveside services for Bill Clark, age 86, of Rusk are scheduled...

Send flowers to the Clark family.