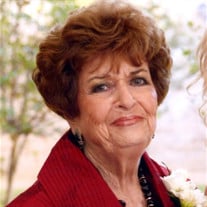 A private family graveside service for Berniece Pryor Glass, age 96, of Jacksonville is scheduled for 3:30 p.m., Saturday, January 4, 2020 at Cedar Hill Cemetery. Mrs. Glass passed away January 2, 2020 in Jacksonville. She was born July 20, 1923 to the late Robert Pryor and Deleva Ray Pryor. Mrs. Glass was born and raised in the Lone Oak Community near Rusk and was a resident of Jacksonville most of her life and a member of First Baptist Church in Jacksonville. She married her beloved husband of 64 years, Herman L. Glass during WWII. She was a homemaker and later, after her children were older, Herman and she owned and operated Herman Glass Oil Company. After his passing, she continued the legacy and worked until her own passing. Her years of working and the relationships she developed with her customers were very special to her. She truly appreciated their continued loyalty and support. She was preceded in death by her husband, Herman L. Glass, son-in-law, Royce A. Fletcher and sister, Thelma Frizzell Mason. She is survived by a son and daughter-in-law, Jerry and Vicki Glass of Ft. Worth, TX, three daughters and sons-in-law, Judy and Byron M. Moore Jr. of Tyler, TX, Terri Fletcher of Tyler, Jill and Edward Starling of Rusk, granddaughter, Amanda Glass Doro and husband Ricardo of Ft. Worth, grandsons, Jason Eric Glass of Ft. Worth, Byron Brandon Moore and wife Kristin of Tyler, Austin Byron Moore of Tyler, granddaughter, Nicole Fletcher Hill and husband Steven of Bullard, great grandchildren, Nicholas, Braxton, Ridge and Victoria Doro; Madison, London and Lexington Hill, and niece, Jan Frizzell of Houston, TX. There will be no visitation.

The family of Berniece Pryor Glass created this Life Tributes page to make it easy to share your memories.

Send flowers to the Glass family.