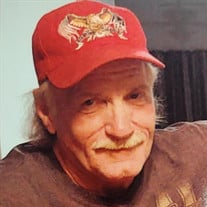 A graveside service for Benny Ray Garner, age 60, of Jacksonville is scheduled for 11:00 a.m., Wednesday, March 9, 2022 at Russell Cemetery with Darrell Dement officiating. Benny Ray, a man of Baptist faith, passed away March 3, 2022. He was born January 9, 1962 in Jacksonville. He served in the United States Army as a Specialist 4. With that, was decorated and had certificates for his services in Missile and Munitions. He was Honorably Discharged December 6, 1984. After returning home from Germany, he went to work in the oil-field for many years. He also was a carpenter’s helper and was currently employed by The Jalapeno Tree. He loved spending time with his family and playing with his nieces and nephews. If you needed to know the title of a movie, who was in that movie, or anything about sports, he was the one to ask. There wasn’t a person he didn’t know. If you asked anybody about B.R., there was always something good to say. Anybody’s best memories, he was behind or there. He’s the type of man to give you his last dollar, the shirt off his back, or the best word of advice you could get. Benny Ray was a man who never judged. He loved everyone for who they were. Benny Ray Garner easily can be titled as one of the best men you could have the privilege to know. He was preceded in death by his father, Pearl Garner, brother, Robby Garner and step-father, David Gordon. He is survived by his mother, Barbara Garner of Jacksonville, brother, Tony Garner of Jacksonville, nieces, Amber Garner (KC Gamboa), Brittiney Garner (Tim Wagoner) and Taylor Garner all of Jacksonville, great nieces and nephews, Shayna, Angel, Mia and Zoe Gamboa, Makayla Garner, Makeyln and Makenzie Horn all of Jacksonville and Jaslyn and Jace Wagoner of Tyler, TX. Pallbearers will include Kirby Smith, Glenn Middleton, KC Gamboa, Angel Gamboa, Tim Wagoner and Makelyn Horn. Honorary pallbearers will be Mike Abernathy, Billy Ray Goff, Daniel New, and Bill Finley. Visitation will be from 6:00 p.m. to 8:00 p.m., Tuesday, March 8, 2022 at Wallace-Thompson Funeral Home.

The family of Benny Ray Garner created this Life Tributes page to make it easy to share your memories.

A graveside service for Benny Ray Garner, age 60, of Jacksonville...

Send flowers to the Garner family.