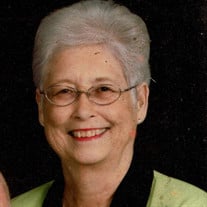 Funeral services for Barbara E. Kennedy, 85, of Rusk, will be 2:00 p.m., Wednesday, March 23, 2022 at the Rusk First United Methodist Church under the direction of Wallace-Thompson Funeral Home with Pastors Charles Nunnally and T.J. Gabelman officiating. Burial will follow at Shady Grove Cemetery. Mrs. Kennedy passed away from an extended illness on March 19, 2022. She was born December 24, 1936 in Forney, Texas to the late Eldis (June) Garrett. She was an administrative assistant for Weingarten Realty Group. She was a long time member of the United Methodist Churches. She was an avid reader. She enjoyed her miniature collies, and seeing the cattle and the calves. She loved her church, her Sunday school class and prayer group, family, and especially her best friend Elmer. She is survived by her husband of 54 years, Elmer Kennedy of Rusk, son Keith Kennedy of Rusk, brothers Jerry D. Earnheart of Rusk, John Earnheart of Rockwall, and sister-in-law Wanda Golemon of Rusk. Visitation will be 1:00 p.m. until service time, Wednesday, March 23, 2022 at the church. Pallbearers will be Ben Middlebrook, Robert Blankenship, Jim Britton, Dennis Kennedy, Terry Kennedy, Mark Welch, and John Banks. In lieu of flowers, donations may be made to the Good Samaritan in Rusk or your favorite charity.

The family of Barbara E. Kennedy created this Life Tributes page to make it easy to share your memories.

Funeral services for Barbara E. Kennedy, 85, of Rusk, will be...

Send flowers to the Kennedy family.